Meet the journo: An interview with Kane Fulton

Meet the journo: An interview with Kane Fulton 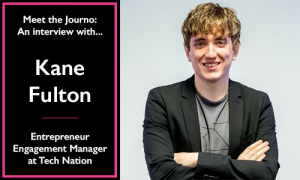 Our ‘meet the journo’ feature allows you to meet the faces behind the names and get to know the journalists, editors and key influencers at some of Yorkshire leading publications!

This month, we spoke to Kane Fulton, Entrepreneur Engagement Manager, Yorkshire at recently re-named Tech Nation who talked about how he started in journalism, what he thinks makes a good story and his passion for the North!

How did your career in journalism unfold?

Slowly but surely! I actually started out in music journalism, running a local music webzine at university. My halls of residence didn’t have internet, so I had to write the copy there before taking it to the IT suite on a USB stick to upload. It was as great as it sounds.

In 2011 I went back to university to study a postgraduate diploma in journalism, which led to work experience at the Yorkshire Post, CNET UK and Computer Weekly. One year later, I landed my first proper writing gig at Information Age magazine covering enterprise IT.

An opportunity to join TechRadar came calling in 2013, so I made the switch from B2B to consumer tech by taking up a position as Computing Editor. There I reviewed hardware, wrote features and built up news writing experience by attending tech launches around Europe.

For the past year I’ve written about interesting and ambitious digital tech startups based in Yorkshire as part of my National Entrepreneur Engagement Manager role for Tech Nation (recently rebranded from Tech North).

Who inspires you the most?

Anyone who works hard to make a living out of what they enjoy doing. That’s everyone from Paul Rose, who edited the Teletext magazine Digitiser back in the 90s (and today runs Digitiser2000), to Kugan Cassius and James Helder who produce brilliant boxing coverage on their IFL TV YouTube channel.

At the more leftfield end of the scale, I’d encourage you to (cautiously) check out Nardwuar the Human Serviette; the level of research he conducts before interviewing his guests is incredible.

What kind of stories particularly interest you

Startup founders tend to be self-confident, innovative and ambitious people – so interviewing them is rarely dull! That said, some stories are more interesting than others to cover.

Any with a human interest element tend to really grab me – Falklands War survivor Simon Weston’s motivational talk to BigChange’s workers was a fascinating one to cover; as was the launch of ViCario’s blood pressure monitoring device, which promises to change how people across the world detect hypertension.

At the end of the day, it’s the problem-solving aspect of startup tech that really fascinates me – how founders repeatedly identify solutions to everyday problems, using constantly evolving tech to solve them and build businesses.

I have a fondness for old computers, dating back to owning an Amiga in the late 80s. As such, I was really excited when somebody who developed titles for Commodore’s machine offered to email me photos of his collection of rare prototypes he owned from that era. It wasn’t exactly a major scoop, but it tied in nicely with a themed PC gaming week that we were running at the time.

What are some of your goals for the future?

After three years as an organisation, Tech North recently officially evolved into Tech Nation, merging up with Tech City in London. The Tech North team and I have a passion for the North, and this latest move will allow startup founders in the region to connect with other entrepreneurs across the UK and reap the associated benefits.

I plan to dedicate more of my time to producing content that raises the profile of tech startup founders across the country who are running business of all sizes – from early-stage startups to scale-ups and late-stage companies.

At the same time, I’d like to tap into the knowledge of founders who have found success – especially if they’ve participated on Tech Nation business lifecycle programmes, from Northern Stars to Future Fifty – to help the next wave of entrepreneurs.

What are some common myths or challenges about a career in journalism?

You don’t need to live in London, and you certainly don’t need shorthand if you’re going to be a tech journalist – but it pays massively if you can learn to type up to 120 words per minute ­– I’m very grateful to have developed that skill over the years. That helps with every form of online communication – from writing emails to livetweeting on Twitter – not just typing articles.

What do you believe makes a great story?

Does it have a human element? Has anybody else covered it? Is it topical? Is it original? Is it unusual? Has somebody overcome adversity, or helped somebody else? Is it timely? Does it involve innovative tech? Any or all the above, really.

What kind of publications do you enjoy reading?

I still love the smell and feel of magazines, so it could be anything that tickles my fancy when I’m strolling past WHSmith! I tend to get my regional business news fix from Yorkshire Insider and local newspapers like the Yorkshire Post and Sheffield Star, in addition to BQ Magazine; The Business Desk; and Bdaily. On the consumer tech side, I’m all about TechRadar; T3; IGN; and PC Gamer. When it comes to learning about bands and playing music, I love picking up Guitarist magazine and visiting Pitchfork.

How do you cope with the stress of tight deadlines?

When they’re looming, I make an extra effort to have a few early nights and squeeze extra hours of writing into the morning. I’m a morning person, but it doesn’t always work.

Outside of work, what do you like to do in your spare time?

I try to keep relatively fit by running 10ks every few months, though I’m slightly odd and prefer to do most of my training on the treadmill rather than outside – mainly so I don’t have to deal with traffic and other runners. Music is my main passion along with tech – I record songs using guitar and bass, overlaying silly rap or speeches over the top. My songs are on my SoundCloud account – please don’t comment on them. (Or if you do, be nice.)

Finally, what piece of advice would you give to people wanting to pitch their business to you?

Take a look at what I’ve already written over at TechNorthHQ.com (Tech Nation website coming soon). If you think it would chime with our content mission, of helping to raise the profile of fast-growing digital tech companies, then get in touch. I’m also keen to talk to tech startup founders who can share insight into how they’ve overcome their challenges, for the benefit of other entrepreneurs.

Special thanks to Kane for getting involved in our ‘Meet the journo’ feature! We’ll be back next month with another interview with a leading Yorkshire journalist.