Meet the journo: An interview with Gill Laidler

Meet the journo: An interview with Gill Laidler 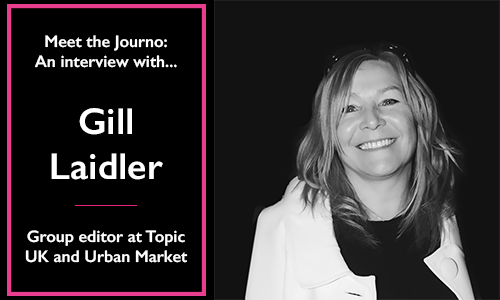 Our ‘meet the journo’ feature allows you to meet the faces behind the names and get to know the journalists, editors and key influencers at some of Yorkshire leading publications!

This month, we spoke to Gill Laidler, group editor of TopicUK and soon to launch magazine, Urban Market.

How did your career in journalism unfold?

I’ve been a writer as long as I can remember, writing my first essay at 5 years old. I started working in advertising and marketing after I left school and worked in various jobs: media buyer, graphic designer and journalist. In the early days I mostly worked on staff newspapers for Morrison’s, Yorkshire Television, Sports Council, Vileda, Joshua Tetley and Empire Stores. I always thought that a local business magazine was missing, something that pulled business communities together, so with the skills of my business partner, we launched TopicUK five years ago to fill that gap and help small businesses promote their products and services. It has been interesting creating print media when everyone else has moved away from it!

Who inspires you the most?

I don’t really have a particular person, I usually just go with my own gut feelings, but if I had to choose anyone it would be Jamie Oliver, he has been able to turn his trade as a chef into businessman, restauranteur and author, seemingly with ease.

What kind of stories particularly interest you?

I like to read about people. I’m generally nosey so I like to know how people have achieved things in their life, I like to know about their journey which is why we always feature someone each edition in TopicUK.

The one that stands out the most for me was interviewing James Somerville who is Vice President of Design at Coca Cola in Atlanta. I have known James for many years when he first started his design business in Huddersfield. He has had such an interesting journey. Meeting and interviewing Jimmy Choo last year was interesting too.

What are some of your goals for the future?

That’s easy, to continue growing TopicUK. We are about to rebrand taking TopicUK into one magazine, covering the whole of Yorkshire which will allow us to cover new areas for our partners and we have a new project at the moment with the launch of a new newspaper called Urban Market. This will feature food and drink predominantly, but all local. We will be talking about growing your own food, baking, local deli’s and farm shops, seasonal food and recipes, something that research has shown up as in demand. We should have the first edition printed and online at the beginning of July.

What are some common myths or challenges about a career in journalism?

Many people think that it’s a glamorous job, interviewing people, attending parties etc. In truth it’s the opposite, it’s long hours quite often until midnight, sat at a computer writing, chasing articles, chasing people and making sure that the business works.

What do you believe makes a great story?

That’s a tough one because what is interesting to me might not be to someone else, but generally people like to read about people. A great story will be one that is interesting, well written, to the point and memorable.

What kind of publications do you enjoy reading?

I read everything. Newspapers, business news, cookery books, lifestyle magazines, gardening magazines, food, local interest. There is always a magazine or book in my hand. I love books, I started collecting them when I was about 4 years old.

How do you cope with the stress of tight deadlines?

To be honest, I am more stressed when things are quiet and not much is happening which is rare. I hate Bank Holidays when I am working, and nobody is around, it’s like where is everyone, why is nothing happening? I love what I do so don’t believe there is any stress, people use stress as an excuse for many things in their lives.

Outside of work, what do you like to do in your spare time?

Work, if that’s what we are calling it. I don’t think that I work, I do every day what I love doing, writing, creating, talking to people and going to events, where is the work in that? I do read lots though and spend time looking for new projects.

Finally, what piece of advice would you give to people wanting to pitch their business to you?

Be honest, open and genuine. I don’t like people who have hidden agendas.

Special thanks to Gill for getting involved in our ‘Meet the journo’ feature! We’ll be back next month with another interview with a leading Yorkshire journalist.

Want more? Have a read of our last Meet the journo with Kane Fulton from Tech Nation.